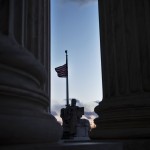 The political and criminal-law fallout from the sudden death of U.S. Supreme Court Justice Antonin Scalia is, of course, being widely discussed as President Obama prepares to nominate a successor. But NPR has done a good job at detailing a half-dozen cases that really illustrate how much Justice Scalia sculpted the modern civil litigation landscape.

For example, remember the huge Wal-Mart lawsuit over treatment of female workers? NPR backgrounded the case: “The issue before the Supreme Court was whether female employees as a group could be certified as a single class, suing Wal-Mart at a single trial. Lawyers for the women introduced evidence showing that female employees held two-thirds of the lowest-level hourly jobs at Wal-Mart, but only one-third of the management jobs, and that women overall were paid on average $1.16 per hour less than men in the same jobs, though the women had more seniority and higher performance ratings.”

Scalia was widely noted as a reason Wal-Mart prevailed in its appeal to the high court. Other cases of illustration, like Hobby Lobby and Citizen’s United, can be found here: 6 Major Supreme Court Cases That Would Have Been Different Without Scalia