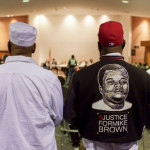 Photo of Michael Brown Sr., right, at a City Council meeting in Ferguson, Mo., from a New York Times report, 2/10/16, “Department of Justice Sues Ferguson, Which Reversed Course on Agreement”

The U.S. Justice Department is suing the town of Ferguson over its refusal to make changes in how its police and justice system operates. Ferguson, of course, is the St. Louis suburb that been the focus of a national protest over police behavior since 18-year-old Michael Brown was killed in a police shooting there is 2014. Among other problems, the city’s court system was an example of how “civil” infractions like traffic tickets could become criminal charges if court dates, fines or other procedural milestones were missed. A federal report found that the police were acting more or less as a profit-generating system for the town’s budget.
Read about the lawsuit in a very solid New York Times story.