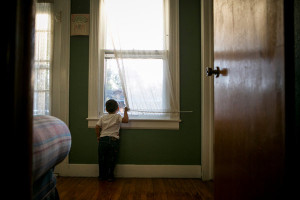 Photo from NYT report, 1/8/16: A 2-year-old boy from Honduras at a shelter in San Antonio, where he stayed with his mother before joining relatives elsewhere in the United States.

A New York Times story is detailing how an influx of Central American refugees is complicating the Obama Administration’s immigration policies, including how building family detention camps to send an anti-immigration signal in 2014 has come back to challenge legal and political situations in an election year. In particular, the report notes that Jude Dolly M Gee of the Federal District Court of the Central District of California ordered back in August that migrant children could not be held in a locked detention center and had to be released, with their parents, “without unnecessary delay.”

Instead of moving away from the camps, the government doubled-down win increased capacity. The NYT report is also interesting in noting that the camps were meant to send a “stay away” message to potential asylum seekers. It says that the “… Obama administration devised a strategy to manage the influx, putting them in detention centers to convince others that illegal crossers would be caught and sent back.”