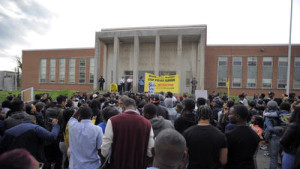 A new Baltimore-based attorney’s group is referencing Freddie Gray in its push for free access to civil attorneys in some cases like child custody decisions and home evictions, the Baltimore Sun reports. Leadership of the Access to Justice Commission says that “… Gray, the 25-year-old West Baltimore man who suffered a fatal injury in police custody last April, grew up in housing with lead paint. He agreed to convert a major lead paint settlement that would pay out over many years into a lump sum that ultimately was worth far less.”
Reporter Ian Duncan writes that the group, “some of Maryland’s top lawyers,” has “launched a fresh drive Monday to have poor people represented by attorneys in civil cases in an effort to spare the vulnerable from what they see as predatory legal practices, such as buying out lead paint settlements for cents on the dollar.”
The story quotes sate Rep. Elijah E. Cummings using language usually reserved for addressing shortcomings in the criminal justice system (as opposed to civil cases): “If you do not have justice, then you’ll have the absence of peace…. I’m seeing it more and more, and … at some point, people explode. So we have a duty.”
The idea of requiring some civil cases to have a “right to attorney” similar to criminal cases is often called “civil Gideon,” after the landmark Supreme Court case that cemented the right to an attorney so often referenced in TV programs. Some cities, most notably San Francisco and New York, have moved toward civil Gideon, often citing potential cost savings if fewer people lose their homes.
Read more about the Baltimore group here.