Paper Reports On Little-Known Option For ‘Border Kids’ In U.S. 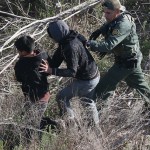 Remember that influx of “border kids” from two summers ago? The owes who showed up at the border, often unaccompanied, asking for asylum? Well, the San Diego Union-Tribune has a great story about a little-used program that is allowing many to stay in the country on a path to a green card – in effect, bypassing the overworked parts of the immigration system.

The paper offers some background: More than 100,000 [border-crossing] children since 2014 have been released to sponsors — usually family members or relatives — with more than 11,000 settling in California, federal data shows. Los Angeles has received 5,776, the largest number of any county in the state. San Diego has received a fraction of that, some 359

The report outlines what is known as “Immigrant Juvenile (SIJ) status” and said such documents “… filed with the U.S. Citizenship and Immigrations Service has increased 187 percent from 2013 through last year, records show. The number of those petitions that have been approved has also risen sharply, from 3,431 in 2013 to 8,739 in 2015, according to government data.

The point, says the Times-Union, is that “… getting status as a Special Immigrant Juvenile can be important, since it paves the way for recipients to become lawful permanent residents — getting a “green card” that allows them to live legally in the U.S. Advocates see it as a humanitarian step available only to those children who are fleeing abuse, neglect or who have been abandoned in their home countries. But some critics say the program highlights a weakness in the immigration system that opens a backdoor for some to get legal status.”

It’s an interesting report even for those following the immigration situation fairly closely:
http://www.sandiegouniontribune.com/news/2016/mar/11/unaccompanied-minors-legal-program/