Public School Must Pay $3 Million For Denying Space To Charter 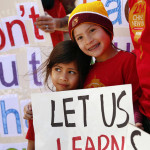 Los Angeles public schools have been ordered to pay $7.1 million to a San Fernando Valley charter school because the system failed to provide free classroom space, a violation of California law. As part of what amounts to one of the nation’s biggest charter school experiments, the Golden State requires public schools to help with charters, which are paid for with public funds but are managed independently. Litigation has been a byproduct.

The Los Angles Times reported that “… arbitrator John Zebrowski said that the district’s failure to comply with the law harmed children attending the charter during those [three] years because it forced the school to use some money intended for educational programs to lease a building. Zebrowski said students were further harmed because the building leased by the charter was inferior to what it would have received from L.A. Unified.”

Ivy Academia, with about 1,100 students, reportedly spent $3 million on rent and other costs from 2007-10, but the arbitrator said L.A. Unified should be on the hook for more money because he believed the property denied to the charter had a higher value. The LAT also noted that “the district must also pay the charter $650,000 in attorneys’ fees.”