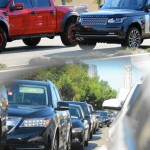 Traffic in West L.A. in October. Black drivers in California were found to be arrested at higher rates than whites for driving with licenses suspended because of unpaid tickets, a new report found. (Axel Koester / For the Times)

If anyone thought Ferguson. Mo., was then only place in America with a tickets-to-jail pipeline (and maybe nobody did), a new Los Angeles Times report sets them straight. It seems there’s not only a pipeline, but that African Americans and Latinos are more likely than others to lose their driver’s license because of unpaid tickets – and then to be arrested for driving with suspended licenses.

The LAT explains that the “… Lawyers Committee for Civil Rights of the San Francisco Bay Area, examined U.S. Census Bureau data, records from the California Department of Motor Vehicles and information from 15 police and sheriff’s departments in the state to document by race the impact of unpaid traffic fines. Part of the report says that “… individuals who cannot afford to pay an infraction citation are being arrested, jailed and prosecuted, and are losing their licenses and their livelihoods,” the report said. “The communities impacted by these policies are disproportionately communities of color.”

A few items from the report:

— During that time, 85% of 20,000 people arrested by the L.A. County Sheriff’s Department for driving with suspended licenses were black and Latino, according to the report.

Read the Times story here:
A disproportionate share of blacks and Latinos lose their driver’s licenses because of unpaid tickets, study finds