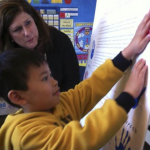 Can new legislation remove the motivation for a longstanding lawsuit? That idea may be tested in the Golden State as a Democratic California lawmaker is introducing legislation to answer a court ruling that could upend California’s teacher employment rules, the Sacramento Bee reports. The newspaper backgrounds that “… a 2014 decision in the Vergara v. California lawsuit ruled unconstitutional laws that dictate how long it takes teachers to earn tenure, how underperforming teachers can be fired and how teachers are laid off during budget pinches. Judge Rolf Treu agreed with plaintiffs that the laws hurt disadvantaged students by keeping inept teachers in classrooms.

The Bee adds that “… the group pursuing the lawsuit argues it went to the courts because a Legislature cozy with teachers unions will not act. Since Treu’s ruling, Republicans in the Democrat-dominated Legislature have unsuccessfully pushed bills to change teacher employment rules. They failed, opposed by the California Teachers Association and other unions.”
The litigation group said it does not have an opinion yet on the new legislation but that any impact upon the lawsuit would have to be seen “through the lens” of the actual complaint.