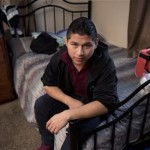 The Associated Press is releasing a Los Angeles-based investigative report that pretty much indicts the entire U.S. government effort to deal with those unaccompanied kids seeking a sanctuary in the United States. The tale of epic fail begins “… as tens of thousands of children fleeing violence in Central America crossed the border in search of safe harbor, overwhelmed U.S. officials weakened child protection policies, placing some young migrants in homes where they were sexually assaulted, starved, or forced to work for little or no pay, an Associated Press investigation has found.”

Responding to public pressure, the U.S. simply cut some corners. The AP notes that “… first, the government stopped fingerprinting most adults seeking to claim the children. In April 2014, the agency stopped requiring original copies of birth certificates to prove most sponsors’ identities. The next month, it decided not to complete forms that request sponsors’ personal and identifying information before sending many of the children to sponsors’ homes. Then, it eliminated FBI criminal history checks for many sponsors.”

The AP found dozens of children who were placed in abusive situations and reports that “Sen. Rob Portman, R-Ohio, who chairs the Senate’s bipartisan Permanent Subcommittee on Investigations, said he will hold a hearing on the agency’s child placement program Thursday because he is concerned that the failures are systemic.”