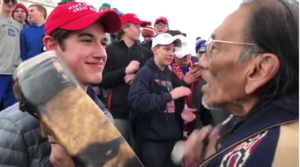 On February 11, L. Lin Wood, an Atlanta based lawyer, filed a complaint in conjunction with Kentucky based lawyer, Todd McMurtry, in the Eastern District of Kentucky against the Washington Post (Wapo).

Kentucky does not have Anti-Slapp Laws — laws designed to allow for early dismissal of lawsuits related to Freedom of Speech. Mr. Wood is an experienced defamation litigator who has represented multiple high-profile clients, including accused Atlanta bomber Richard Jewell, former Congressman Gary Condit, and Burke Ramsey the brother of Jon Benet.

The complaint was filed on behalf is Mr. and Mrs. Sandmann, as guardians of. The Plaintiff seeks $50 million in compensatory damages and $200 million in punitive damages for the harm Nicholas allegedly suffered as a result of the negligent, reckless, and malicious attacks both digital and in print. Sandmann asserts that these events have caused permanent damage to his life and reputation and were directed by malice. It is the events of January 18, 2019 that occurred on the National Mall in Washington, D.C. that serve as the basis for the civil complaint.  Read the full story…