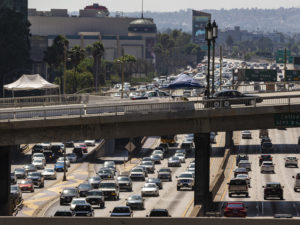 Photo credit: Damian Dovarganes/AP as reported by NPR on 9/18/19.

President Trump announced he will revoke a 2013 waiver issued by the EPA to the California Air Resources Board which allowed the state to set stricter air-quality standards than those imposed on the federal level.

According to an NPR report, “The move comes after the Department of Justice earlier this month launched an antitrust investigation into a July deal between California and four automakers – Ford, Volkswagen, Honda and BMW – and is seen as a broader effort by the White House to rollback efforts to combat climate change.”

The report notes, “California’s Attorney General Xavier Becerra has vowed to take the Trump administration to court. Speaking on Tuesday, California’s Democratic Gov. Gavin Newsom said that while the White House ‘has abdicated its responsibility,’ his state ‘has stepped up.'”