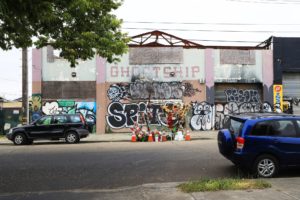 An Oakland, California jury acquitted one man and could not reach a decision on a second man in the role they played in a 2016 warehouse blaze that killed 36 people.

One of the deadliest structural fires in recent American history, the fire occurred on Dec. 2, 2016 in Oakland’s Fruitvale neighborhood in a building known as Ghost Ship, which had been illegally used as an artist studio and residence.
According to the Los Angeles Times, “The jury acquitted Harris, the warehouse’s 29-year-old self-described ‘creative director,’ and deadlocked on the charges against Almena, the warehouse’s property manager. Yesterday’s verdict capped a long judicial saga that involved two trials, an aborted plea deal and a near-mistrial. It was not immediately clear whether or not prosecutors would attempt to retry Almena.”

The report continues, “’For the victims’ loved ones, many of whom had either sat in court and listened to heart-rending testimony about their relatives’ final moments during the four-month trial or flown back and forth from other parts of the country to attend key hearings, Thursday’s result was the latest round of pain and frustration,’ as crime and policing reporter James Queally explained in his story on the verdict.”

The New York Times reports, “The jury’s decision comes after a tortuous deliberation process that began in July, but was interrupted last month when Judge Thompson dismissed three jurors for unspecified misconduct, replacing them with three alternates. The judge then ordered the jury to begin deliberating from scratch. The trial featured three months of testimony.”

The NYT report continues, “’I’m just stunned,’ Alberto Vega, 36, whose brother Alex Vega was one of the victims, said outside the courtroom. ‘I feel sick to my stomach. It was obvious what rules were broken.’”