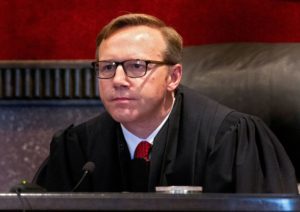 Cleveland County District Judge Thad Balkman made a landmark ruling, which found Johnson & Johnson liable for fueling an opioid epidemic in Oklahoma. (Photo credit: Reuters as reported by The Washington Post on 8/26/19.)

Johnson & Johnson must pay the state of Oklahoma $572 million in the first opioid-related state case to go to trial.

Judge Balkman issued his ruling Monday, Aug. 26, which The Post dubbed a “landmark decision” and “the first to hold a drugmaker culpable for the fallout of years of liberal opioid dispensing that began in the late 199os.”

An estimated 400,000 people have died of overdoses from painkillers, heroin and illegal fentanyl since 1999. according to the report.

Oklahoma attorneys sought $17.5 billion over 30 years for treatment, emergency care, law enforcement, social services, and other addiction-related needs, but Judge Balkman ordered Johnson & Johnson to pay $572 million “to remedy the drug crisis in the first year, based on the state’s plan,” The Post reports. The company has vowed to appeal.