VICE: Pot History Made, Patent Granted For Plants, Litigation Sure To Follow 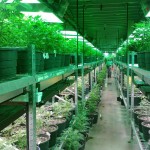 A marijuana grow operation in Colorado. (Photo via Pixabay)

VICE has a deep-dive story about a history-making patent, granted last fall, for a very specific marijuana plant and its resulting THC content. It’s the first of its kind, but experts predict it represents a first step toward litigation. Says VICE: “… Patent No. 9095554 may be the opening salvo in a new series of legal battles over innovations in marijuana breeding [and] the prize could be nothing less than the commanding heights of an industry that’s projected to soon top $40 billion, with the exclusive rights to produce, sell, or license designer varieties of pot. Over the next few years, the contest could take the form of a gold rush for patents.

The excellent report includes comments from Reggie Gaudino, a Ph.D. in molecular genetics who works as director of intellectual property for Steep Hill Labs, a US firm that analyzes medical and recreational marijuana for compliance with public safety standards, who explains that “… a well-written patent is like a declaration of war — you write a patent in a way that covers those who can sue you, and those you can sue.”

And there’s this: Many small pot farmers are more scared of corporate competition than they are of criminal prosecution, according to Hilary Bricken, a Seattle lawyer who chairs the Canna Law Group of the firm Harris Moure, which supports marijuana businesses. “These people aren’t worried about the Department of Justice anymore,” said Bricken, who has represented cannabis enterprises in commercial litigation and has consulted on intellectual property issues. “Now they’re worried about Monsanto.”

As usual, VICE is a step ahead of most everyone else. Read the report here: A Patent for Cannabis Plants Is Already a Reality — and More Are Expected to Follow | VICE News