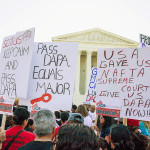 Demonstrators gathered outside the Supreme Court on Monday as it heard a challenge to President Obama’s plan to shield millions of immigrants from deportation and allow them to work. Photo Credit, New York Times report, 4/18/16

The New York Times reports that the U.S. Supreme court seemed “sharply divided” during extended arguments over a 26-state challenge to President Obama’s order to shield millions of undocumented immigrants from deportation and allow them to work in the country legally.

The Times backgrounded that “… Scott A. Keller, Texas’s solicitor general, said Mr. Obama’s plan was unprecedented and unlawful. He faced skeptical questions from the court’s more liberal members about whether his state had suffered the sort of direct and concrete injury that gave it standing to sue. The case, United States v. Texas, No. 15-674, was heard by an eight-member court, and the absence of Justice Antonin Scalia, who died in February, has altered the judicial dynamic. A 4-4 deadlock is now a live possibility, one that would leave in place an appeals court ruling that blocks the plan without setting a Supreme Court precedent.”

Back in January, when the high court agreed to consider the case, the possibility was that the court would issue a major decision – in effect, the thinking was, the court might ask if President Obama had met his constitutional obligations to enforce the nation’s laws.

Of course the case, formally entitled “United States v. Texas, No. 15-674,” is being considered by an eight-member court after the February death of Justice Antonin Scalia. That opens the very real chance of a 4-4 deadlock, which would leave the lower court’s ruling against the president’s plan in place, but would not set a legal policy.

← Supreme Court Vacancy Is Tip Of Judicial Backlog Crisis
VICE: Pot History Made, Patent Granted For Plants, Litigation Sure To Follow →
Logging In...