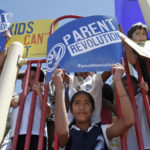 As Democrats leveled sharp questions at Betsy DeVos, president-elect Donald Trump’s education nominee, this week, they stressed her decades of support for the charter school movement. Clearly, the Trump Administration and the GOP-controlled Congress will make “school choice” a spotlight issue, including the “parent trigger” movement that didn’t really come up in the DeVos questioning, perhaps because her efforts have mostly been in Michigan.

Parent trigger is the idea that parents can more or less take over a failing school. A half-dozen states have some level of parent trigger law, but the one that’s been most lawsuit-tested is California’s. The Golden State actually passed the nation’s first such law in 2010, and of course litigation came shortly after.

Natasha Lindstron, a respected reporter who has covered the California Parent Trigger since its passage, offers a good overview report here http://hechingerreport.org/parent-trigger-showdowns-loom-nationwide/

And if you’d like to see how The Los Angeles Times, which supported the original parent trigger legislation, feels about it now, check that out here:
http://www.latimes.com/opinion/editorials/la-ed-parent-trigger-20150803-story.html