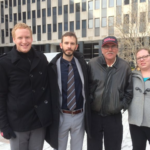 New York’s WNYC radio has an excellent report on why the Big Apple’s immigration courts are backed up, noting that more than a half-million cases are pending nationwide and tens of thousands of those are in NYC. The reporter visits one of the city’s 28 immigration courts, which are actually not federal courts but administrative functions of the Justice Department. The story follows one immigrant and notes ” the whole process took about five minutes for each case, and Khan was scheduling future court appearances as late as August of 2018. This isn’t so bad given, that Schmidt said he was scheduling hearings for 2021 before retiring last summer.”

The reporting is in the context of Donald Trump presidency and any attempt to increase the pace of court-ordered deportations. The take-away is that there’s no real capacity to increase or even keep pace