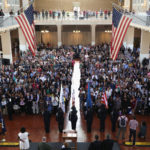 The New York Times is reporting that:

“Dozens of cases of possible wrongdoing by contract workers at the Department of Homeland Security agency responsible for citizenship, visas and green cards have sat idle for two years because internal investigators say they have been denied the authority to look into the allegations, interviews and documents show.”

The story says that investigators at the U.S. Citizenship and Immigration Services allege they have repeatedly warned top managers of the problem among contractors that “could put the immigration system at risk.”