No resolution expected for ‘Dreamers’ by end of year 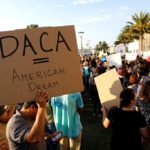 Photo by John Gastaldo/Reuters as included in the PBS report on Dec 5, 2017.

The status of recipients of the Deferred Action for Childhood Arrivals program — commonly known as Dreamers — likely will remain in limbo until 2018, as members of Congress spar over Immigration reform and a potential government shutdown.

“Grassley’s so-called SECURE Act would implement several policies long favored by conservative immigration reformers, most importantly the mandatory use of e-Verify and limits on family-based migration.

In return, the law would grant recipients of the now-cancelled Deferred Action for Childhood Arrivals (DACA) program relief from deportation and work authorization for three years.” Democrats call the bill’s conservative provisions non-starters.

Grassley, in a Senate Floor statement about the SECURE Act on Dec. 5, referred to “the inherent unfairness in our nation’s immigration court and asylum adjudication systems, and how hundreds of thousands of aliens wait in backlogs for years at a time.”

The bill, he said, would “take meaningful steps to reduce immigration court and asylum adjudication backlogs by hiring more judges and personnel, limiting the number of continuances an immigrant can receive, and imposing new safeguards to combat well-documented fraud and abuse.”

Based on the tenor of talks in Congress, however, no quick solutions are expected for the court backlog.

Negotiations over immigration reform are being tied to funding of the federal government, prompting some to predict a delay in dealing with DACA.

Discussing immigration-reform negotiations, Senate Majority Whip John Cornyn told reporters, “I hope our colleagues on the other side of the aisle will take our word for it as demonstrated by our good faith in making an offer to them that we do want to resolve this, but it’s not going to be before the end of this year,” according to CNN.

Others want quicker action on DACA. A group of 34 House Republicans on Tuesday asked Speaker Paul Ryan to act this month on legislation “dealing with the 800,000 young immigrants brought to the United States as children and living here illegally,” noted a PBS report. “Ryan has said he does not see a need to act before March, the deadline President Donald Trump gave Congress to find a permanent solution after he suspended the temporary protections against deportation granted by the Obama administration.”

But CNN reported, “There is a growing recognition on Capitol Hill that including immigration provisions to protect DACA recipients in the year-end spending bill could be a deal breaker for Republicans even as some Democrats in the House have threatened to vote against a spending package that doesn’t include it.”

To avert a government shutdown, the House and the Senate voted Thursday for a short-term spending bill “to keep the federal government running for another two weeks,” CNN reported.