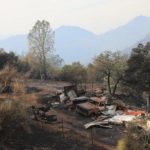 Where there’s smoke, there are lawyers. From the Press Democrat in Santa Rosa, Calif., comes a wry acknowledgement that the record-setting wildfires that devastated California’s wine country set the table for a legal feeding frenzy.

“After the limitless demonstrations of valor, selflessness and generosity, we now witness a flood of offers from lawyers from down the block and across the nation to advocate for victims of our greatest disaster — and for an ample share of any judgments or settlements. …” notes the article, titled “Chris Smith: First came the heroes, then the helpers, now the lawyers.”

“There are law-firm solicitations on the radio, on billboards, in newspapers, on Facebook, everywhere you look.” The article quotes Baron and Budd, a multi-state law firm, which chronicles the fire damage at its website. Baron and Budd reports, “The human costs of the recent Northern California wildfires were staggering, with 43 people losing their lives. Approximately 6,000 acres were burned and more than 8,400 structures destroyed. As a result, the dollar amount of damages could be in the billions.” The firm cites “reports that equipment owned and maintained by Pacific Gas & Electric (PG&E) may have played a role in causing the disaster.”

The Press Democrat notes, “The eagerness of the lawyers trolling for clients is pretty clearly related to the blood in the water: the possibility that PG&E may not have adequately maintained and protected its power lines.”

In the aftermath of the fires, The New York Times on Oct. 20 noted, “Determining the causes of the fires could have huge financial implications in deciding who ultimately pays for the extensive damage, including almost 8,000 structures destroyed. Insurance companies will be looking to recover some of the more than $1 billion that the California insurance commissioner estimates they could end up paying out.”

← Delaware Report Recommends More Funding for ‘Civil Gideon’
No resolution expected for ‘Dreamers’ by end of year →
Logging In...