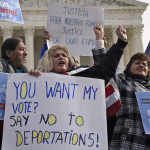 While Donald J. Trump has outraged immigration advocates by saying he intended to deport massive numbers of undocumented residents, the Obama administration is outraging many of the same people by actually deporting families here to seek asylum from dangerous countries. Politico is reporting that “… the administration has so far declined to confirm specifics about the latest round of raids, which were disclosed in a Reuters report this month. According to a document obtained by the news agency, Immigration and Customs Enforcement officials have told agents across the country to prepare for a 30-day ‘surge’ of arrests targeting mothers and children who have recently arrived in the country illegally but have been told to return to their home countries.

One part of the political fallout is simply that immigrant families that might worry about their status just don’t come to the door when political organizers visit. Politico is all over the story here:

← Atlanta Is Worst For Avoiding Deportation
One Nation? It’s All Regional When It Comes To Staying In U.S.A. →
Logging In...