Atlanta Is Worst For Avoiding Deportation 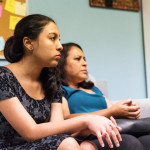 STEVE EBERHARDT FOR THE HUFFINGTON POST
Kimberly Pineda Chavez and her mother, Lourdes, came to the U.S. from Honduras.

Elise Foley, the Huffington Post’s immigration reporter, has a devastating story about Atlanta being the “worst” for immigrants hoping to avoid deportation. She notes that “… more than a third of the people detained under what the government calls Operation Border Guardian were from the Atlanta area, more than any other ICE jurisdiction.

There’s a reason for this. Immigration law doesn’t vary from state to state or court to court. But immigrants’ odds do, and by the numbers, Atlanta is one of the worst places in the country to be an undocumented immigrant hoping to avoid deportation. Justice Department-appointed judges in that court denied asylum 98 percent of the time in the 2015 fiscal year, the highest rate of any immigration court that heard more than five cases. Eighty-eight percent of cases that went before Atlanta immigration courts ended with a removal order. That’s way over the national average: In the country as a whole, immigration judges denied about 52 percent of asylum claims, and 69 percent of cases resulted in a deportation order.”

She also backgrounds that “…Atlanta immigration judges have been accused of bullying children, badgering domestic violence victims and setting standards for relief and asylum that lawyers say are next to impossible to meet. Given Atlanta immigration judges’ reluctance to grant asylum, some immigrants who fear returning to their native countries don’t even pursue it.”

Read the story here: Here’s Why Atlanta Is One Of The Worst Places To Be An Undocumented Immigrant