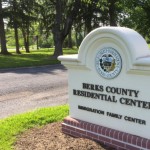 22 women who are being held at Berks County Residential Residential Center started a hunger stike on August 8. They are asking to be released from detention as their cases for asylum move through the courts. Credit: Valeria Fernández/PRI

The New York Times coverage of this week’s United Nations discussion about refugees, which includes a “summit” hosted by President Obama, including spotlighting that ” … the U.S. and a number of other countries also objected to language in the original draft that said children should never be detained, so the agreement now says children should seldom, if ever, be detained.”

That may be because the U.S. has more than a half-million pending Immigration Court cases backed up for years and has detained some refugee families for more than a year. The detention camps have been found illegal by a federal court, and some moms have resorted to hunger strikes. Some 45 countries are expected to agree to new, non-binding goals for the international refugee crisis this week.

In the U.S., immigration regulation is enforced at immigration courts as s “civil matter,” meaning those under detention do not have the same rights as criminal defendants, which would include the right to representation by a lawyer.

Read about the hunger strikes here:
Moms go on a hunger strike to get themselves and their kids out of immigration detention

← Shackles In A Civil Case? With Immigration, That’s The Deal
Next Post →
Logging In...