ACLU alleges abuse of children by Customs and Border Protection

Immigrant children who crossed the border suffered abuse and neglect from federal officials, according to a report released May 23 by the ACLU’s Border Litigation Project in partnership with the University of Chicago Law School. 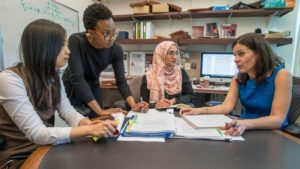 “Elbowing children in the stomach. Lifting a child by the neck. Kicking a child in the ribs. These are all things the American Civil Liberties Union says immigrant children who crossed the border alone experienced while in custody of U.S. Customs and Border Protection,” The Chicago Tribune reports.

Unaccompanied children who cross the border are placed in juvenile detention centers while they await court decisions on whether they can be released to a relative in the U.S., or if they will remain in custody or be deported.

The allegations stemmed from a review of 30,000 pages of documents by three law students, according to Claudia Flores, director of the University of Chicago’s International Human Rights Clinic.

Customs and Border Protection spokesperson Daniel Hetlage said in a statement that the Department of Homeland Security’s Office of Inspector General completed an investigation and found that the claims were unsubstantiated.