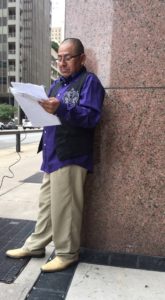 Photo credit: Dianne Solis/Staff of The Dallas Morning News as reported on 9/16/18: “Raymundo Olmedo, a former Load Trail factory worker, stands outside the Dallas federal courthouse after he reported to immigration court on Sept. 13. Olmedo’s name didn’t appear on the Sept. 13 court docket, so he was sent away. More than a dozen immigrants caught in the Load Trail raid faced the same situation at the immigration courts.”

A lack of coordination between federal immigration officials and the courts is leading to instances where immigrants appear for hearings only to be turned away, The Dallas Morning News reports.

Immigrants ordered to be in court by Immigration and Customs Enforcement.arrived for hearings, only for court staff to deem their scheduled times “fake dates,” the news site reports.

“The orders to appear are not fake, but ICE apparently never coordinated or cleared the dates with the immigration courts,” The Dallas Morning News reports. “It’s a phenomenon that appears to be popping up around the nation, with reports of ‘fake dates’ or ‘dummy dates’ in Dallas, Los Angeles, San Diego, Chicago, Atlanta and Miami.”

The situation is only creating more backlogs in an already overburdened immigration court system, the news site reports.