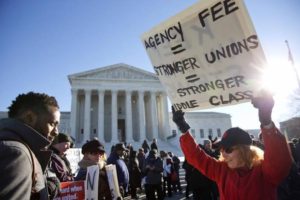 California has found itself in a legal standoff against the federal government and Trump administration over a variety of issues, but one could affect union workers who want to decline union membership.

“California Gov. Jerry Brown has signed a law that aims to give public employee unions legal cover from potentially expensive lawsuits demanding that they repay certain fees to workers that the Supreme Court in June determined were unconstitutional,” reports The Fresno Bee.

“The law, which takes effect immediately, says unions and public agencies cannot be held liable for fees that unions collected before the Supreme Court ruling in Janus vs. AFSCME on June 27 of this year.”

The Supreme Court’s 5-4 decision ended a 41-year precedent that allowed public sector unions to collect “fair share” fees from workers who declined to join a labor organization but were still represented, according to the newspaper.