Trump administration cites success in migrant-family reunification effort, but what of ‘deleted families’? 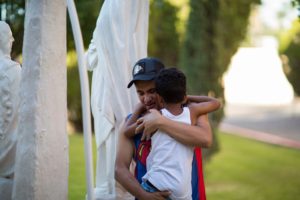 By Thursday, July 26, when a court-ordered deadline loomed for the Trump administration to reunite hundreds of migrant families, government officials reported compliance.

The Washington Post reported on 7/26, “At the expiration of a 30-day court deadline to reunite migrant families separated during its ‘zero tolerance’ border crackdown, the Trump administration said Thursday it has delivered 1,412 children to parents in immigration custody and was on track to return all of those it determined were eligible for reunification.”

“President Trump ordered an end to family separations June 20 amid public outcry and spreading criticism within his own political party, as searing accounts emerged of traumatized children and anguished parents. Within days, Judge Dana M. Sabraw of the U.S. District Court for the Southern District of California, a Republican appointee, ordered the government to return children to their parents and imposed deadlines,” the Post reported.

However, some families, termed “deleted family units,” could not be reunited by the deadline. There was no classification for more than 2,600 children who had been separated from their families and placed in government shelters. According to a The Washington Post report on 7/28, when Customs and Border Protection “sent that information to the refugee office at the Department of Health and Human Services, which was told to facilitate the reunifications, the office’s database did not have a column for families with that designation.”

“After his 30-day deadline to reunite the ‘deleted’ families passed Thursday, U.S. District Judge Dana M. Sabraw lambasted the government for its lack of preparation and coordination,” reported The Washington Post.