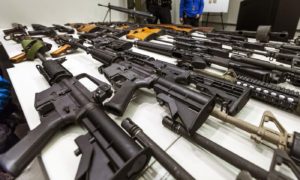 Gun owners are arguing in court that they can’t comply with California’s assault weapon registration due to computer problems.

Gun owner groups filed a lawsuit against California Atty. Gen. Xavier Becerra that “alleges that the system for registering so-called bullet-button assault weapons was unavailable for most of the week before the July 1 deadline,” the Associated Press reported earlier this month.

“Owners who were unable to register by the deadline now potentially face prosecution through no fault of their own, according to the lawsuit filed in Shasta County on behalf of three gun owners by The Calguns Foundation, Second Amendment Foundation, Firearms Policy Coalition and Firearms Policy Foundation,” the AP reported.

The lawsuit alleges the state Department of Justice’s registration system “was largely inaccessible, and inoperable on a wide variety of ordinary web browsers across the state,” Los Angeles Times reported.