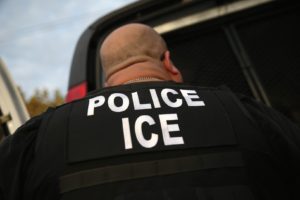 It’s increasingly likely that the U.S. Supreme Court will end up reviewing the procedures used by Immigration and Customs Enforcement (ICE) for immigration arrests, according to experts who see this area of law growing more contentious.

The process for ICE arrests is “one of the most complicated areas of immigration law,” Ashley Tabaddor, president of the National Association of Immigration Judges, told Public Radio International.

In an April 12 report, PRI noted, “Broadly, the only evidence that an ICE officer needs to arrest a person is their identification and proof that they are not a citizen.”

One reason for the disparity is that ICE procedures often take place in civil courts.

The New Yorker chronicled the case of Sergio Perez, a native of Guadalajara, Mexico, who was in the United States as an undocumented immigrant before his arrest by ICE.

“Because immigration-removal proceedings are generally carried out under civil laws, they are exempt from many procedures mandated in criminal cases,” the New Yorker explained. “For example, the warrants that ICE uses to arrest unauthorized immigrants like Perez aren’t reviewed by a judge; they’re just written up by ICE office supervisors. Immigrant detainees don’t have a constitutional right to a lawyer. Fourth Amendment protections against unreasonable search and seizure don’t always apply when ICE agents investigate a target for arrest, because the cases typically don’t involve a criminal prosecution.”

Public Radio International cited an upswing in ICE activity under President Trump as one reason for the growing attention.

“From the day Donald Trump took office through Sept. 30, 2017, ICE arrests increased by 42 percent compared to the same time period the year before, according to an analysis of government data by Pew Research,” PRI reported. “Officers have been more aggressive in their tactics, too. They have shown up in courtrooms, conducted worksite sweeps and confronted people in their homes without warrants. Immigration lawyers say there is an increased need for immigrants’ legal protections to be reconsidered. ‘This is a brewing question that is becoming more intense,’ says University of Las Vegas law professor Michael Kagan.”

In February, National Public Radio reported on a U.S. Supreme Court ruling that found immigrants, even those with permanent legal status and asylum seekers, do not have the right to bond hearings.