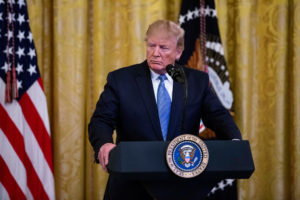 How the First Amendment functions in the social media age gained further clarity this week when a federal appeals court ruled that President Trump violated the Constitution by blocking people from following his Twitter account.

“Because Mr. Trump uses Twitter to conduct government business, he cannot exclude some Americans from reading his posts — and engaging in conversations in the replies to them — because he does not like their views, a three-judge panel on the United States Court of Appeals for the Second Circuit, in New York, ruled unanimously,” The New York Times reports.

Tuesday’s ruling may be appealed.

“Mr. Trump’s legal team argued, among other things, that he operated the account merely in a personal capacity, and so had the right to block whomever he wanted for any reason — including because users annoyed him by criticizing or mocking him,” The New York Times reports.

“Courts have increasingly been grappling with how to apply the First Amendment, written in the 18th century, to the social-media era,” The Times continues. “In 2017, for example, the Supreme Court unanimously struck down a North Carolina law that had made it a crime for registered sex offenders to use websites like Facebook.”

← Another judge rebuked for treatment of sexual assault case
Equifax to pay up to $650 million in data breach settlement →
Logging In...