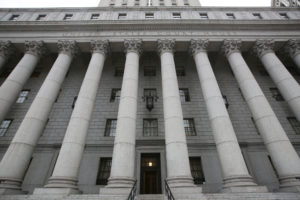 Federal District Court in Manhattan, where a new lawsuit was filed stating challenging the constitutionality of immigrants appearing before judges by videoconference. Photo credit: Hiroko Masuike, as reported in The New York Times, 2/12/18.

According to a report by the New York Times, a lawsuit was filed on Tuesday in the Federal District Court in Manhattan, asserting that “detained immigrants could not fully communicate with their lawyers and participate in proceedings when their only interaction with immigration court was through video.”

In response to the overcrowding in immigration courts, last year, federal authorities in New York started keeping immigrants in detention centers for their legal proceedings, utilizing videoconferencing technology to appear before judges.

According to the NYT report, the lawsuit claims that “the policy infringes upon immigrants’ constitutional rights in a deliberate attempt to speed up and increase deportations.”

“As a result, the lawsuit said, immigrants who might otherwise be granted the ability to stay in the United States instead could be deported. The suit cited several instances when videoconferencing had harmful effects on immigrants and their hearings,” reports the NYT.