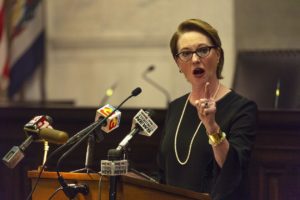 West Virginia lawmakers have impeached all of the state’s Supreme Court justices over spending issues.

The Associated Press reports, “West Virginia lawmakers completed the extraordinary action of impeaching all four justices on the state’s Supreme Court of Appeals for spending issues, including a suspended justice facing a 23-count federal indictment.”

According to The New York Times, “Most of the articles involved the chief justice, Allen Loughry, a Republican, who has been suspended since June and is facing a 23-count federal indictment on charges of fraud and false statements. He is accused of using state property for personal use and of deceiving lawmakers, in addition to the charge of ‘unnecessary and lavish spending,’ most emblematically on a $32,000 office sofa.”

The New York Times also notes that a Republican governor will appoint replacements: “Democrats have described the whole process as a partisan power grab; the Legislature and the governor’s office are in Republican control, while a majority of the justices on the Supreme Court of Appeals, as the state’s highest court is officially known, were elected as Democrats.”