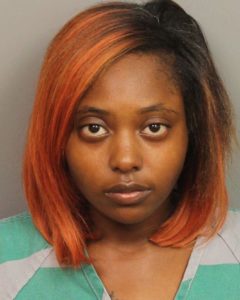 Marshae Jones was charged with manslaughter when she was shot and her fetus died. Photo Credit: Jefferson County Jail as reported by The New York Times.

According to the New York Times, “Marshae Jones was five months pregnant when she was shot in the stomach. Her fetus did not survive the shooting… But on Wednesday, it was Ms. Jones who was charged in the death.”

“The police have said she was culpable because she started the fight that led to the shooting and failed to remove herself from harm’s way,” explains the report. Since Jones was arrested and charged with manslaughter in Alabama last month, there has been “heated debate over the rights of pregnant women and fetuses nationwide, and Alabama is ground zero for the issue.”

From another New York Times report: “Activists have also cited it as a demonstration of the dangers of the “personhood” movement, which pushes for the rights of fetuses to be recognized as equal to — or even more important than — the rights of the mothers who carry them. And many are now watching as the movement gains momentum in Alabama, which already has some of the most restrictive reproductive rights laws in the country.”

The Times explains that last November, Alabama voters approved a ballot measure that amended the state’s constitution to recognize the “sanctity of unborn life and the rights of unborn children.” This has resulted in a number of court cases aimed to protect the rights of unborn children, including a wrongful-death lawsuit by a 19-year-old man against a clinic and a pharmaceutical company that provided an abortion pill to his girlfriend.
“Under Alabama law, life begins at conception,” said Bryan Fair, professor of Constitutional Law at the University of Alabama School of Law as reported in The New York Times. “The question is whether that is consistent with federal constitutional law.”

← New courthouse in Placerville – unsought by judiciary – funded in California budget
Another judge rebuked for treatment of sexual assault case →
Logging In...