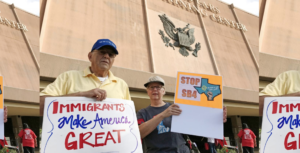 Photo credit: REUTERS/Jon Herskovitz/File Photo, as reported in the article U.S. court upholds most of Texas law to punish ‘sanctuary cities’ on March 13, 2018.

A Texas ban on “sanctuary cities,” which threatens sheriffs, police chiefs and other officials with jail time and removal from office if they do not cooperate with federal immigration authorities, can take effect while legal challenges proceed, an appeals court ruled on Tuesday, 3/15.

Reuters reported, “The law was the first of its kind since Republican Donald Trump became president in January 2017, promising to crack down on illegal immigration and communities that protect the immigrants.”

While upholding the bulk of the law, the 5th U.S. Circuit Court of Appeals struck down a provision “to punish local officials who endorse policies running contrary to the law.”

The New York Times explained, “The law in question — Senate Bill 4, passed by the Texas Legislature in May 2017 — requires police chiefs and sheriffs to cooperate with federal immigration officials, and allows the police to question the immigration status of anyone they arrest. It was passed in response to the proliferation of sanctuary cities, which restrict such cooperation and have gained national attention as President Trump pursues stricter immigration policies.”