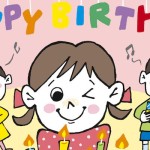 You can finally relax. “Happy Birthday to You” has finally re-entered the common grounds after years of being held by a corporate owner. The California Sunday Magazine is among those reporting on the good news, noting that “… Judge George H. King of the federal district court in Los Angeles initially ruled last September that the copyright was not valid, the company battled on, perhaps because with no rival as the most widely recognized and frequently sung song in the English language, the tune has steadily generated some $2 million a year for the publishing company. Settlement was finally reached earlier this year, and Judge King made it official today.”

The years-long saga of the song cost millions of dollars in time and effort and certainly makes for an interesting tale and is the subject of a documentary. Read the ins and outs here: ‘Happy Birthday’ Suit Resolved: The Most-Sung Song Is Free for All