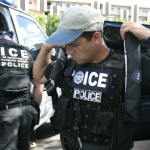 While a recent U.S. Supreme Court made mainstream headlines for dealing President Obama a setback on his attempts to aid undocumented residents, a different narrative has been growing among more alternative media outlets. In particular, VICE has produced some powerful reporting on how the Obama Administration is going after asylum seekers from Central America. A recent pice noted that:

[A] legal coalition, known as the CARA Family Detention Pro Bono Project, reported 40 cases of women and children arrested by US Immigration and Customs Enforcement (ICE) since the series of immigration raids began in May. The majority of those arrests took place in workplaces, homes, and schools, and the CARA project alleges that federal immigration officials engaged in “aggressive and inappropriate conduct.”

The Department of Homeland Security has said that immigration enforcement actions would target Central American migrants who had exhausted their legal options to remain in the United States, but the CARA project’s report suggests that in at least 21 of these cases, immigrants have valid asylum claims that have not yet been heard in an immigration court. Moreover, several of those arrested by ICE did not have an outstanding deportation order, according to the group.

You can see the VICE story here: Immigration Raids in the US Are Targeting People with Valid Asylum Claims, According to a New Report | VICE | Canada