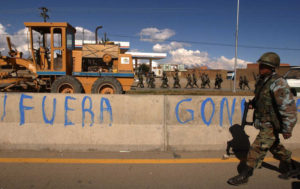 An April 3 guilty verdict in a civil trial in Florida marked something unique in case law: “The case marks the first time that an ex-head of state was forced to face his accusers in a US court for human-rights abuses,” reports The Nation.

“The events in the case took place 15 years ago and thousands of miles away from the US district federal courtroom in downtown Fort Lauderdale where the trial played out,” The Nation recounts. “For three weeks in March, the families of people killed by the Bolivian military during a 2003 country-wide uprising testified against former president Gonzalo Sánchez de Lozada and his minister of defense Carlos Sánchez Berzaín.”

The landmark human-rights case stemmed from the U.S. Torture Victims Protection Act, “one of the broadest human-rights laws in the world,” The Nation explains. “The TVPA created the ability to bring cases of extrajudicial killings and torture against foreign officials when the potential remedies are exhausted in a plaintiff’s home country.”

In 2011, Bolivia’s Supreme Court found five former military officials and two former cabinet ministers guilty for their role in the 2003 killings. “After a two-and-a-half-year trial, the generals received 10- to 15-year prison sentences, and the ministers three years a piece,” the article explains.

“Sánchez de Lozada and Sánchez Berzaín were indicted in that case as well, but because at the time Bolivian law prohibited trials in absentia and both were residents in the US, neither was tried. US support for the two men was made explicit in 2007, when Sánchez Berzaín was granted political asylum.”

The 2003 killings happened in the midst of political protests against a natural gas pipeline project. “The coalition government of Gonzalo Sánchez de Lozada, popularly known as Goni, who had won his second term with the help of US Democratic Party election consultants, declared a state of siege and militarized El Alto and surrounding areas,” the article recounts. “Once the dust settled, around 60 people had been killed and over 400 wounded. …”