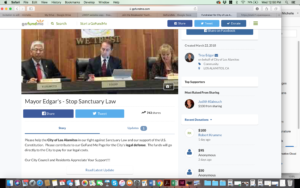 The Go Fund Me page for the City of Los Alamitos legal defense.

Help with paying a dog’s veterinary bills. Funds to stage a benefit for a peanut vendor. Aid to a family recovering from a house fire. GoFundMe.com, the popular crowd-funding site, typically channels donations to individuals with specific fundraising needs.

“Please help the City of Los Alamitos in our fight against Sanctuary Law and our support of the U.S. Constitution,” reads the page titled, “Mayor Edgar’s – Stop Sanctuary Law.” “Please contribute to our GoFund Me Page for the City’s legal defense. The funds will go directly to the City to pay for our legal costs.”

A FindLaw blog reported on the larger legal dispute, noting, “The city of Los Alamitos, located in Orange County, is facing a lawsuit over a recently enacted ordinance permitting the city residents and officials to disregard the state of California’s recently passed sanctuary state law. … But, in response to the Los Alamitos law, concerned residents, through the ACLU and other groups, filed a lawsuit seeking to stop the city’s law from taking effect.”

The state law faces its own legal challenges, but city officials weren’t content to wait for that litigation to play out.

“Curiously, Los Alamitos has actually set up a GoFundMe page seeking donations to fund the litigation,” FindLaw reported. “And if you thought this curious idea was the result of some social media intern on the cutting edge, it was the town’s mayor, Troy Edgar, that launched the page.”

The L.A. Times reported in April, “Los Alamitos Mayor Troy Edgar said he could not comment on the pending lawsuit but stated that it will prompt him to focus on promoting a GoFundMe page that he launched last month to help pay for legal costs.”