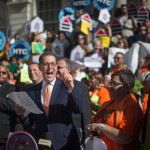 Councilman Mark Levine at a rally at New York City Hall on Monday in support of a bill that would provide legal help to low-income tenants facing eviction. Credit Dave Sanders for The New York Times

The New York Times continues to cover the Big Apple’s efforts to provide some level of ‘civil Gideon’ to residents facing housing evictions. The term refers to providing civil representation in some cases, usually immigration and family law issues but also evictions, in the same way public defenders represent criminal defendants who cannot afford an attorney.

The NYT reports that “… despite $62 million set aside this fiscal year by Mayor Bill de Blasio, a Democrat, to bolster legal help, more than 70 percent of low-income tenants in New York City still go without lawyers in Housing Court, according to a report published in June by the newly created Office of Civil Justice, part of the city’s Human Resources Administration.

The story backgrounds that “… with landlords almost always represented by lawyers, tenants are overmatched from the start, tenant advocates and city officials say. Across the city last year, there were nearly 22,000 evictions, with the greatest number in the Bronx.”

And, reporting on a meeting in late September, the NYT says that “… the City Council held a hearing on a bill that would make New York City the first jurisdiction in the country to guarantee lawyers for any low-income residents facing eviction. Under the measure, tenants who make below 200 percent of the federal poverty line would qualify. (For a single person, the cutoff would be $23,540; for a family of four, it would be $48,500.) The bill, which has already garnered the support of an overwhelming majority of council members, is part of a broader effort gaining momentum across the country to create a right to counsel for people in high-stake legal cases like evictions and foreclosures.”

You can read the entire NYT piece here: For Tenants Facing Eviction, New York May Guarantee a Lawyer