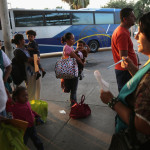 The New York Times is among those reporting that the Obama administration is “delaying deportation proceedings” for recent immigrants in cities across the United States, allowing more than 50,000 of those who fled Central American communities since 2014 to remain in the country – legally – for years. It’s not a true policy shift, but instead a cost-saving measure, experts say. They also say mostly families are the ones staying.

The NYT reported that: “The shift, described in interviews with immigration lawyers, federal officials, and current and former judges, has been occurring without public attention for months. It amounts to an unannounced departure from the administration’s widely publicized pronouncements that cases tied to the so-called surge of 2014 would be rushed through the immigration courts in an effort to deter more Central Americans from entering the United States illegally.”

The report also notes that “.. the delays are being made as a cost-saving measure, federal officials said, because of a lapse in enforcement that allowed immigrants who were supposed to be enrolled in an electronic monitoring program to go free. Some of those affected had failed to report to government offices to be fitted with GPS ankle bracelets, according to a February memo from the chief immigration judge, Print Maggard, in Arlington, Va. Now that the government will not have to pay the daily fee of $4 to $8 a person to monitor such bracelets, the immigrants’ cases have been pushed back for years, some until 2023, judges and federal officials said. The cases of those who met their reporting obligations are still being expedited, with some cases moving faster than lawyers and judges had expected.”