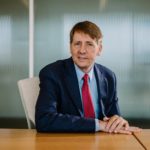 Richard Cordray will step down as director of the Consumer Financial Protection Bureau as reported in the New York Times, 11/15/17. Photo Credit: Andrew Mangum for The New York Times.

This month, President Trump signed a bill that blocked class-action lawsuits against banks, dismantling a rule issued by an Obama-era agency in the wake of the 2008 financial crisis.

Two weeks later, on Nov. 15, Richard Cordray, the director of the Consumer Financial Protection Bureau, the rule’s originator, announced that he would be leaving the federal agency by the end of this month thereby “removing a major opponent to the Trump administration’s efforts to dismantle business regulations and unfetter Wall Street,” reports the New York Times.

With President Trump’s Nov. 1 bill signing, House Joint Resolution 111 became law, and lawsuits against banks faced a key legislative hurdle. The Senate voted Oct. 24 to kill the rule that, the L.A. Times reported, “would have allowed Americans to file class-action suits against banks instead of being forced in many cases into private arbitration.”

The L.A. Times noted that George Slover, senior policy counsel for Consumers Union, said that the 51-50 Senate vote “means that big financial companies can lock the courthouse doors and prevent consumers who’ve been mistreated from joining together to seek the relief they deserve under the law.”

During congressional passage in October, the White House reported that “the rule would harm our community banks and credit unions by opening the door to frivolous lawsuits by special interest trial lawyers.”