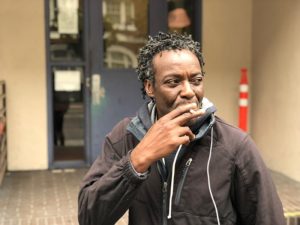 Sean Kayode is shown outside the Next Door homeless shelter in San Francisco on July 26, 2018. Photo Credit: David Gorn/CALmatters as reported on 9/13/18.

A lawsuit would halt California from impounding vehicles and leaving residents homeless.

“Sean Kayode said he watched his whole world roll away from him at 3 in the morning,” reports KPBS TV. “Kayode had been living in his car in San Francisco about two years. During the early morning March 5, traffic police towed and impounded his black 2005 Mercedes Benz — for having too many overdue parking tickets.”

Jude Pond of the Lawyers’ Committee for Civil Rights in San Francisco helped file a lawsuit on Kayode’s behalf “to challenge the California law that allows cities to tow a car away if that car has five or more overdue parking tickets,” the news station reports.

Kayode now lives at Next Door homeless shelter. He said his car wasn’t just a place to sleep, “it was how he earned a living, he said, delivering food through Uber Eats.”