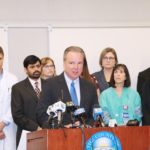 The Los Angeles Times reports the the LA Board of Education has told its legal staff to participate in a lawsuit challenging President Trump’s power to withhold federal funds from “sanctuary cities” that follow their own policies for immigrants. The LAT explains that the LA schools will join a lawsuit already filed by Santa Clara County that called President Trump’s executive order “unprecedented” and unconstitutional attempt to expand executive power.”

The report also notes that “… if the Trump administration carried out its threat — and interpreted it broadly — L.A. Unified could be at risk. The nation’s second largest school system received more than $585 million from the federal government last year, a substantial portion of its $7.15-billion general fund revenues.

Read the story here:
L.A. Unified to step out in support of federal funds for sanctuary cities