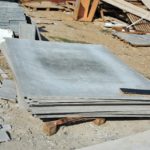 Asbestos wallboard on a job site: Who pays when workers get sick? (Shutterstock)

Daniel Fisher at Forbes is reporting that attorneys general from 13 “Republican-leaning states” are involved in a lawsuit against several big national asbestos bankruptcy trust funds, seeking “… information on whether they are squandering money and failing to reimburse states for Medicare and Medicaid expenditures.”

Fisher’s report says that the lawsuit follows “… demand letters to the Armstrong World Industries, Babcock & Wilcox, DII and Owens Corning/Fibreboard bankruptcy trusts on Dec. 12. So far none have responded, Utah says in the complaint filed March 7 in state court in Salt Lake City.”

The report also notes that “… The AGs cite the Medicare Secondary Payer law, a little used federal statute that carries stiff penalties for insurers and others who arrange for lawsuit settlements to be paid directly to claimants without making sure they first settle outstanding bills for Medicare coverage. Penalties can include double damages and even plaintiff attorneys can be liable, said Frank Qesada, an attorney with MSP Recovery, a Miami law firm that has filed numerous national class actions on behalf of private Medicare providers.”