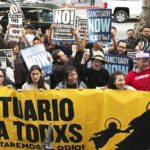 Some of about 100 people demonstrate outside a federal immigration court in Los Angeles on Monday, March 6, 2017. (Michael Balsamo / AP)

A former immigration court judge is calling on Los Angeles to move quickly and provide attorneys for undocumented residents facing deportation. Bruce J. Einhorn, who was an immigration judge for 17 years, says in a Los Angeles Times opinion piece that he “… watched sons trying to grasp complicated legal concepts not written in their native language and mothers desperately advocating for daughters who were in detention. I saw families torn apart by a system they were unable to understand.”

The former judge makes both legal and financial points in arguing his case and notes that Trump administration policies are likely to increase court volume and backlog. Already, he explains, San Francisco hearings might take two years before there’s room on a court docket. He also argues that the L.A. program might be modeled on the New York City project.

Judge Einhorn writes that “… New York City’s program, which began in 2013, has been tremendously successful. After securing representation for its first 1,000 clients, the program reported that it completed more than a third of the city’s deportation cases in the first or second hearing, and that immigrants were nearly 10 times more likely to win their cases. The program has since been expanded to New York State.”
Read his opinion here:

← Forbes: State AGs Probe Asbestos Trusts Over Medicaid Payments
How Many Florida Folks Represent Themselves In Court? We May Soon Know →
Logging In...