How Many Florida Folks Represent Themselves In Court? We May Soon Know 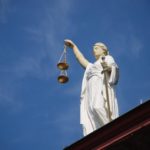 The Florida Bar Association Foundation is conducting polling to figure out how many people in the Sunshine State actually represent themselves in court. Eventually, it’s expected that the number, along with tracking outcomes in those cases, will become part of the debate over who the government should provide attorneys.

WLRN Radio of Miami is among those covering the effort, quoting Anais Taboas, South Florida Pro Bono Program Officer for the Florida Bar Foundation: “It’s a well known fact: there are many individuals who can not get an attorney. Whether it’s because they can’t afford to, or whether it’s because they don’t know… where [to] find an attorney… It’s extremely helpful if every single person going into court has access to an attorney and it’s part of the access to justice issue.”

Results are expected in late April. Connect with the story here:

How Many People Represent Themselves In Court? Lawyers Are Trying To Figure That Out

← Former Immigration Judge Calls For L.A. To Provide Lawyers
Traffic ‘Amnesty’ Ending. Will It Be A Return To ‘The F-Barrel’? →
Logging In...