Traffic ‘Amnesty’ Ending. Will It Be A Return To ‘The F-Barrel’? 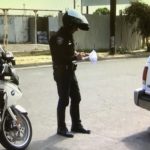 A California amnesty program created after an outcry over municipal traffic fines and fees is going away. The amnesty scheme was put into place in 2015 after a general outcry that included a national HBO report on John Oliver’s “Last Week Tonight” program. That report made use of a a KCRA 3 (Sacramento) investigative story about the ballooning cost of court fees. It also introduced Oliver’s campaign to stop the “f-barrel,” although the cable host did not abbreviate his hopes.

David Manoucheri of KCRA is reporting that the amnesty program “… provides relief for drivers whose licenses were suspended because they failed to appear in court or had outstanding court debts, the DMV said in a news release. The fines would be reduced by 50 to 80 percent depending on the driver’s income.” Before, the station report, “… basic fines such as a $35 stop sign violation could balloon to over $300.”

Such fees and fines are not considered “criminal” by the courts, so violators do not hold the right to legal counsel. But they can still land people in jail for non-payment. Manoucheri notes that it’s been good for the municipal collections: “Since the program went into effect, 205,686 delinquent accounts have been reduced, 192,452 driver licenses have been reinstated and $35,530,680 in fines has been collected. That money would never have been collected by officials if the program wasn’t in place.”

Oliver connected the dots to illustrate that such municipal fees have been linked to the unrest in Ferguson,. Mo. and other problems. And his report remains one of the more anger-inducing indictments of municipal policy.

← How Many Florida Folks Represent Themselves In Court? We May Soon Know
Health Care Funds Enough To Warrant Trust-Fund Lawsuit? →
Logging In...