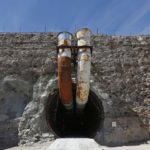 The portal of a five-mile-long tunnel into Yucca Mountain in Nevada, where the Energy Department wants to bury 70,000 metric tons of radioactive waste. Photo credit: Los Angeles Times report, 3/29/17

The decades-old legal battle over Yucca Mountain, the proposed nuclear waste facility in Nevada, has resumed, the Los Angeles Times reports. The paper says that “… Nevada has filed some 300 legal ‘contentions’ against the Energy Department’s license, each of which must be examined by a special board. The state is swinging into action to file even more contentions if the license action is resumed, said Robert Halstead, chief of the state’s nuclear office.”

“They think because Reid is gone, this will be a cakewalk. Wrong,” Halstead told the LAT. “I see them going through a licensing procedure that will cost $1.5 billion and take five years, with a 50% chance of success.” The delays have resulted in staggering costs. The government promised nuclear utilities decades ago that it would take the spent fuel by 1998. Customers have paid a fraction of a penny on every kilowatt-hour of electricity into a fund for waste storage, which now contains about $36 billion.

The facility has long been considered for storing the nation’s nuclear waste and gathered political traction during the George W. Bush administration. Then Harry Reid became Senate leader and more or less nixed the proposal. But with President Trump in charge, the new energy secretary, former Texas governor Rick Perry, has already visited the site.