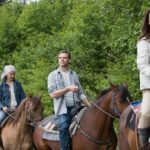 The original suit claimed that the aroma from a nearby marijuana grow made horse riding less pleasant.Thinkstock file photo

A ruling by the U.S. Court of Appeals for the Tenth Circuit is raising eyebrows in the legal marijuana industry and the Denver weekly newspaper Westword warns that the litigation “… is based on federal racketeering laws, that anti-marijuana forces hope will help them destroy the marijuana industry here and throughout the country.”
At issue is an argument that a Colorado pot-growing operation damages neighboring property owners — they say their horse-riding experience is diminished by the smell from marijuana and other concerns, including construction. In its decision, the 10th Circuit effectively found that the plaintiffs’ use of the Racketeer Influenced and Corrupt Organizations Act (RICO) statute had merit because the adjacent property violates federal laws against marijuana, which is specifically mentioned in the RICO laws.
Westwood breaks it down: “This ruling could be game-changing. If the Reillys and Safe Streets Alliance succeed, other individuals or groups would be able to file complaints against marijuana businesses using RICO on a scale so massive that the entire industry could sink under the weight of litigation — or so opponents hope.”
Read the story here:
How Bizarre Pot Smell Ruling Could Destroy Colorado’s Marijuana Industry