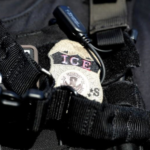 The top Massachusetts court has ruled that police and court officers do not have authority to detain undocumented immigrants until federal law enforcement officials can take them into custody, a controversial practice called a “hold” that is debated around the country. It is believed to be the first time a state supreme court has ruled to ban the practice and the Reuters news service says the “… decision amounts to a rejection of requests by the federal Immigration and Customs Enforcement agency for courts and law enforcement agencies to hold illegal immigrants, who are facing civil deportation orders, in custody for up to 48 hours after their cases are resolved.”

The court ruled that ordering the hold amounts to a “fresh arrest” and said there is no authority to do so. News organizations quoted ICE officials as saying they are reviewing the decision.